In December, resorts in Colorado worried about the unpromising beginning of ski season. In Denver, over 230 days passed without snow, the second-longest consecutive period in a century. Estimates of the state’s snowpack were around half of usual snowpack levels. Warm temperatures restricted snow-making, a strategy used in the absence of snowfall. In response, some resorts delayed the opening dates of the winter ski season.

Then conditions in Colorado changed. By March, many resorts surpassed last year’s snowfall. Storms brought 27 inches of snow in 10 days to ski areas in Summit County like Breckenridge. In response, resorts across the state extended their ski seasons, including seven of Vail Resorts properties. This winter is now Vail Mountain’s longest continuous snow season in its history.

The onset of climate change has shifted global weather patterns. Extreme events and volatility in weather such as snowfall, precipitation, and temperature are more common than they used to be. As weather patterns change, meteorologists and scientists agree that extreme weather is part of a “new normal.”

The Demex Climate Center analyzes and assesses trends and variability in snowfall at hotels across the globe. For the hospitality and service industries, volatile and changing patterns in snowfall have repercussions on businesses that depend on reliable snowfall from year-to-year. The ski industry, valued at a total $788 billion, and the resorts associated with ski mountains are at particular risk. Extremely mild winters can lead to significant lost revenue. Researchers have, for example, estimated that the five least-snowy winters between 2001 and 2016 cost the ski industry $1 billion and over 17,000 jobs each season.

Climate change particularly affects the state of Colorado, where the ski industry is vital to the state and its economy. Colorado’s ski industry produces an estimated annual $4.8 billion for the state, as well as 46,000 jobs and $1.9 billion in income from wages. Analysis of climate trends at the locations of major hotels shows that most of the hotels experiencing the strongest downward snowfall trends in Colorado are on the slopes throughout the Rocky Mountains.

Parametric insurance is a new option to cover the impacts of climate change. Parametric insurance is tied to a certain objective parameter – like snowfall, rainfall, or temperature. Claims automatically trigger payments to policyholders when the parameter reaches a pre-agreed threshold. Coverage for snowfall pays claims corresponding to a bad ski season and offsets lost revenue and increased costs (for snowmaking).

These policies are calibrated to first-party financials at specific policyholder locations. Assessing and estimating operating margins allows a collaborative approach to managing risk. 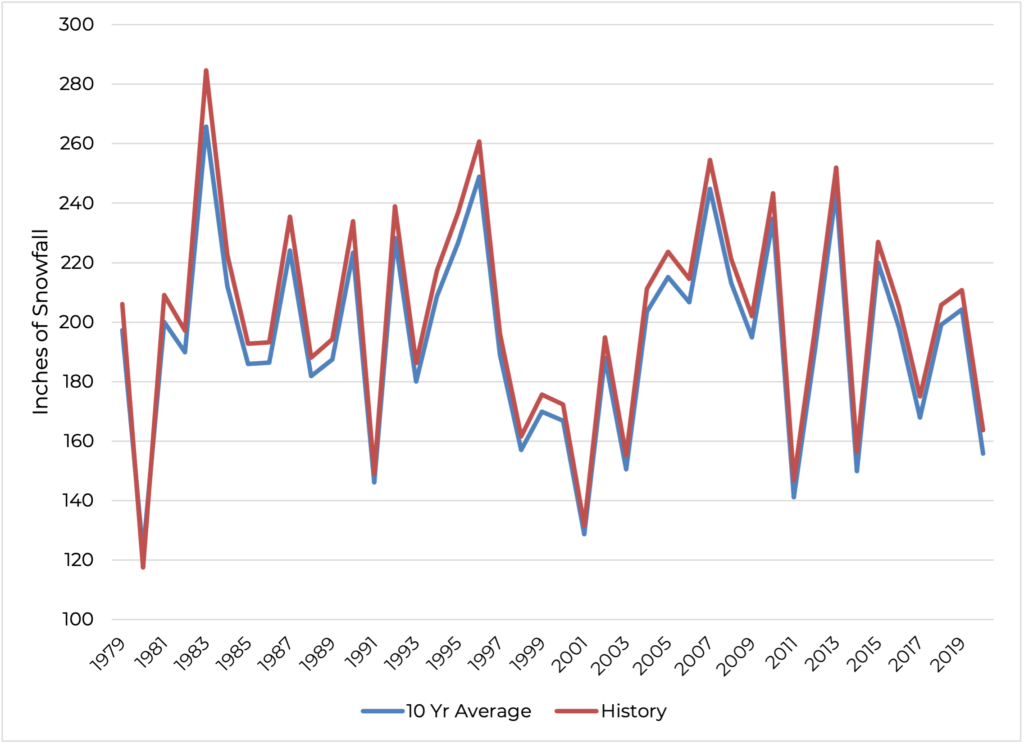 Snowfall Distribution: The baseline distribution of snowfall around the average skews low: extreme low snowfall is more common than extreme high snowfall. The “worst” winters for the resort in Vail are between around 120 to 155 inches. Snowfall generally does accumulate less than 120 inches. It most commonly falls between around 190 to 220 inches. 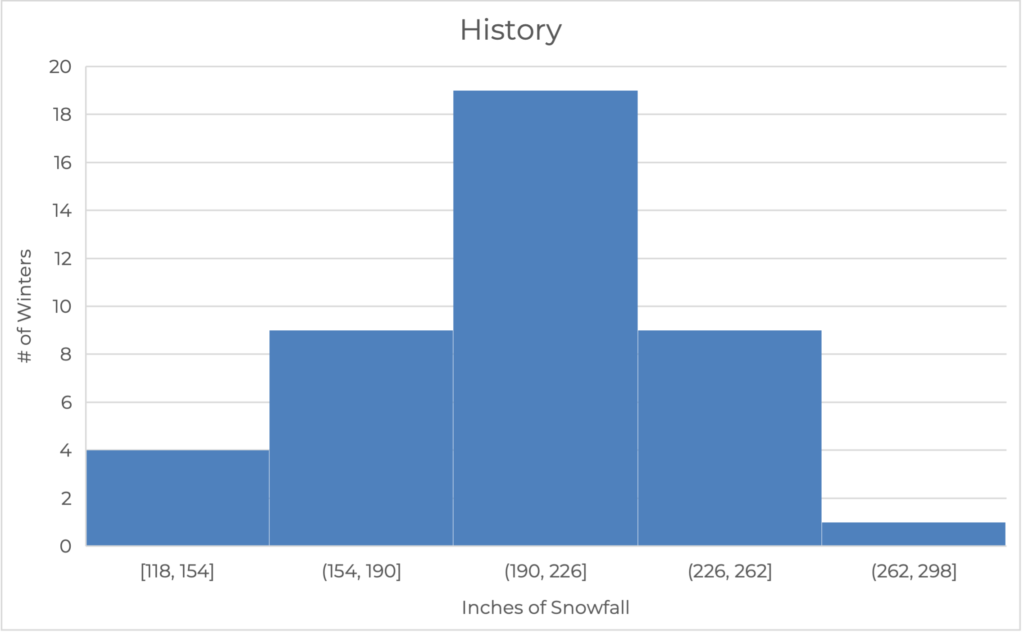 Example Resort Economics: In a winter with low snowfall, the resort profits less and spends more to make snow. In this case, our customer resort wants to be protected against potential losses up to an estimated maximum of $5,000,000 based on the financials of previous winters. The resort wants $5,000,000 of coverage when only 120 inches of snow accumulates in the worst winters.

Risk Tolerance: The resort can protect itself against various levels of snowfall risk. A range of different coverage options are available to the resort with a limit of $5,000,000.

Example Outcome: The resort selects coverage with a premium of $823,900. Claims kick in when snow accumulates less than 160 inches and pays $125,000 per inch down to 120 inches. A Demex Climate Appraisal demonstrates $4,176,100 of insurable value at risk (including paid premium) with a recovery rate about once every five years. Recent policy years have demonstrated over $800,000 in value when including the paid premium. 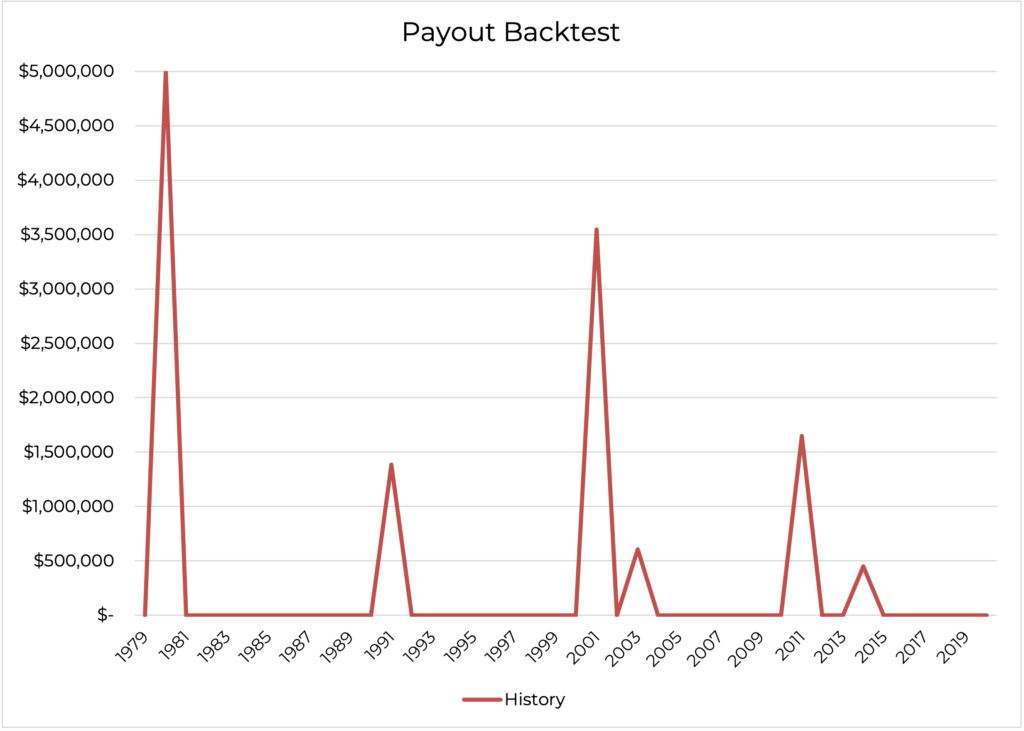 If winter snowfall between October 2022 and April 2023 is measured at 150 inches, the policy would pay out $1,250,000, compensating the resort for the losses of low snowfall.