As changes in climate and extreme weather continue to impact communities, resilience is within reach. Companies like Demex are building solutions for climate risk, including risk transfer products that insure municipalities and organizations from the costs and damages of extreme weather.

Demex has pioneered a comprehensive approach to climate risk management to immunize organizations from the financial repercussions of volatile weather. Our customized solutions for modeling, assessing, and managing climate-related risks provide the necessary tools that allow organizations to protect against the costs of volatile weather events. These products and services provide essential protection for businesses, communities, and organizations facing increasingly severe weather patterns.

As in the first half of summer, extreme heat events have continued across the globe.

In early August, a heat wave over western Europe elevated temperatures in the United Kingdom, Ireland, France, and Spain. In England, a level 3 out of 4 heat wave action was issued by health officials. The heat wave followed the hottest July on record in Spain.

In mid-August, the United States continued to experience extremely high temperatures. On August 16, the New York Times estimated that 13% of the U.S. population in the contiguous states lived in areas with dangerous levels of heat. The Times’ new heat index identified the major cities with the hottest forecast for the 16th: 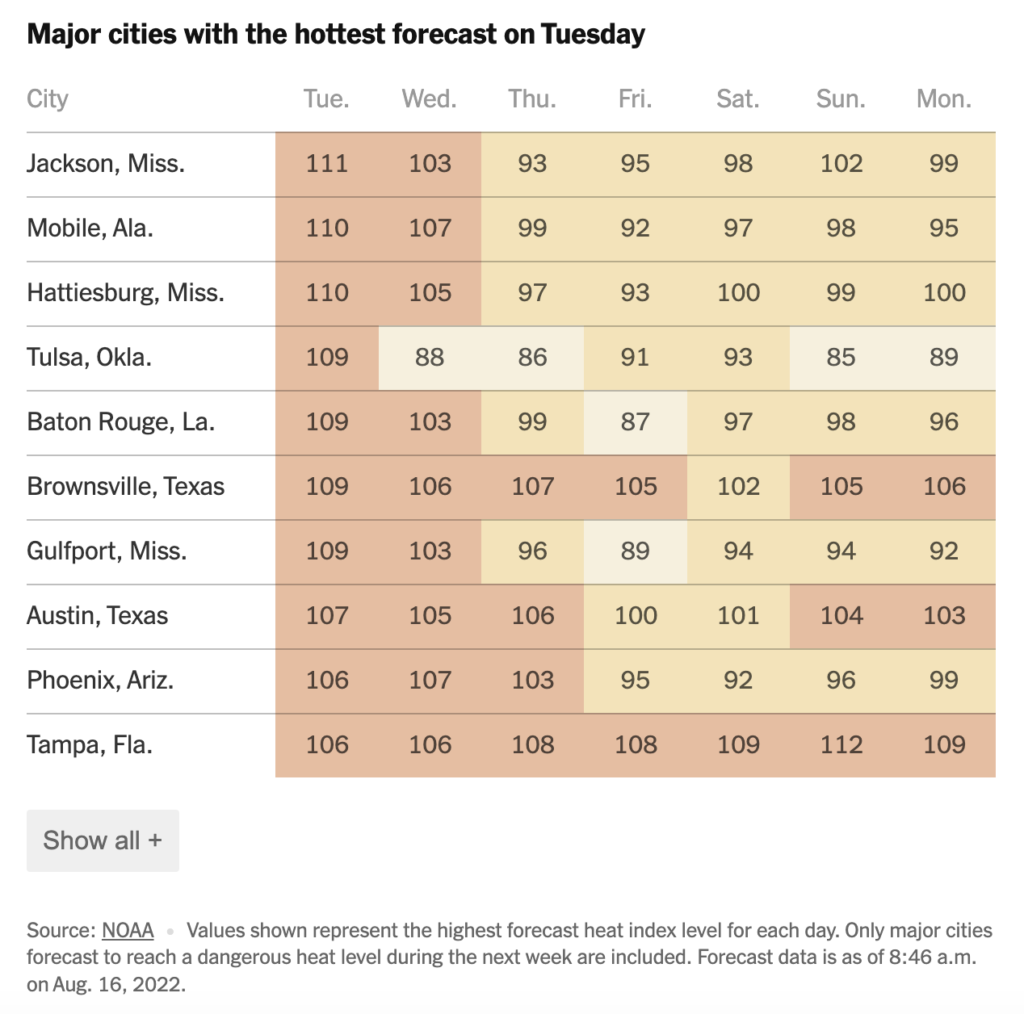 Climate change continues to alter our perception of “normal” summer temperatures. The total effect of these extreme heat conditions led to the second-warmest June and third-warmest July on record in North America, and hottest summer on record in China.

In mid-July, the National Oceanic and Atmospheric Association estimated moderate to exceptional drought across 44.6% of the United States. By late August, 40 states experienced at least moderate drought. 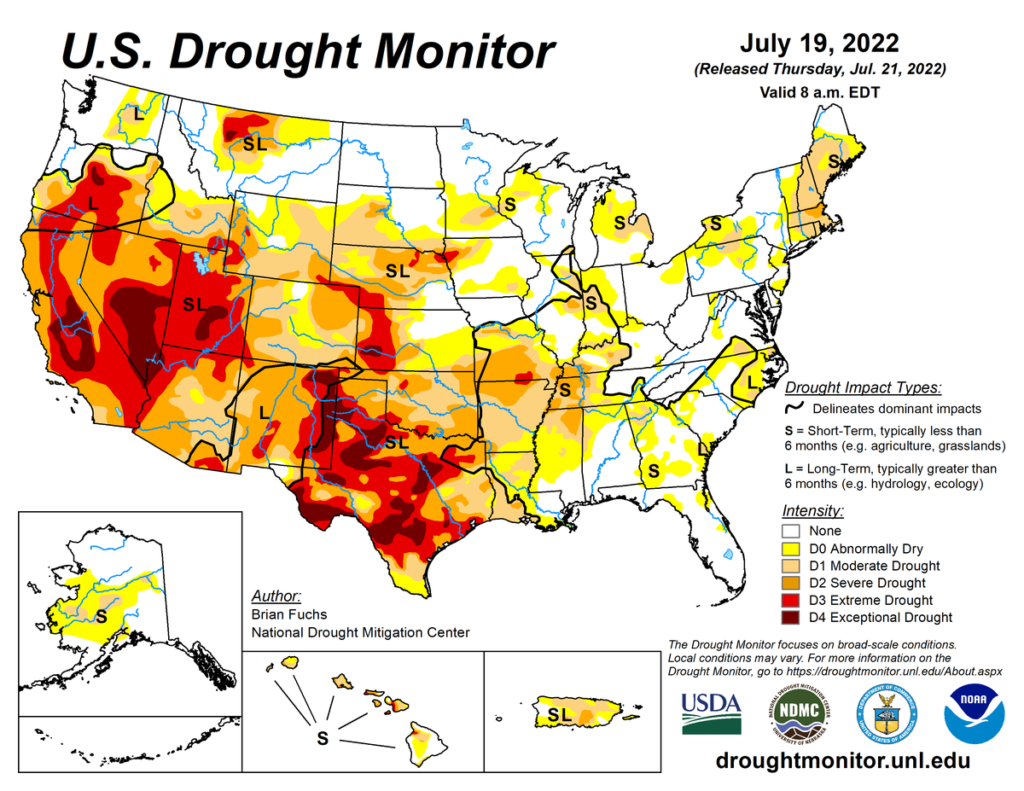 The Horn of Africa, the region comprising Ethiopia, Kenya, and Somalia, is currently experiencing its worst drought in over 40 years.

In August, 64% of the EU was under drought conditions. Norway’s hydropower reservoir supplies in August have dropped to their lowest point in 25 years, driving up electricity prices. France has experienced its most severe drought on record, and Britain recorded its driest July in 90 years.

China’s drought in the southwestern part of the country has also broken records. The Yangtze River has receded so far that ships can no longer be guaranteed to reach ports upstream. Likewise, the Rhine and the Danube Rivers in Europe are so low that many ships cannot pass through.

Changes in climate conditions include more frequent events on both sides of the spectrum of extreme precipitation. Although persistent drought overwhelmed many countries across the globe, extreme rainfall inundated other regions. The end of July and August included record flooding in the midwestern United States and over a widespread area of Pakistan.

In St. Louis, floods reached 8.5 feet of water in parts of the city at the end of July, with significant property damage recorded. Over nine inches of rainfall had fallen overnight, setting a new 24-hour record. Flooding shut down interstates I-170 and I-70, as well as four state highways.

In Kentucky, flooding led to at least 37 deaths throughout the state. Data from the National Weather Service mapped by the New York Times indicated that total rainfall across most of the state was between two to four inches higher than the average from 1981 to 2010, with anomalies in excess of 10 inches to the east: 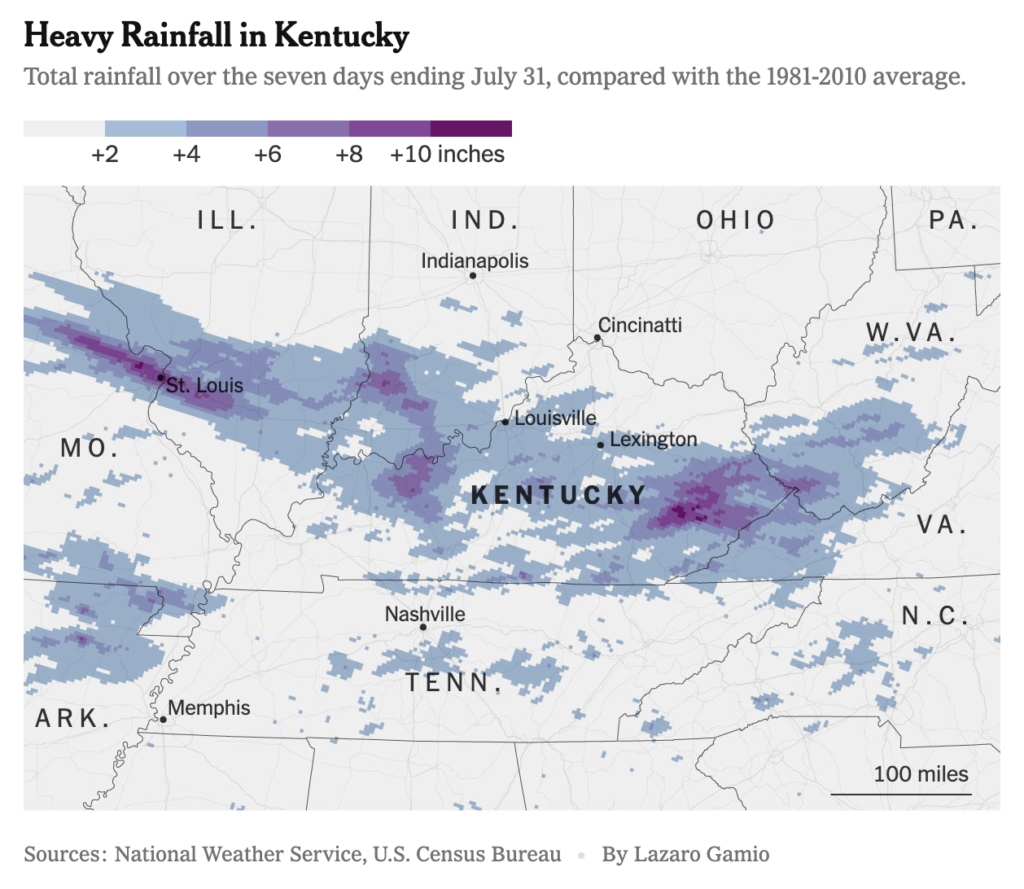 In Pakistan, heavy flooding in late August damaged or destroyed more than one million homes and led to over 1,100 deaths and millions of displaced residents. The current disaster is the worst flooding in the country’s history, with more than one-third of the nation underwater.

The flooding was triggered by a particularly extreme monsoon season, with rainfall over 10 times heavier than normal precipitation, as well as melting glaciers following an extreme heat wave. Pakistan has the most glaciers in the world outside of the Arctic and Antarctic.

Demex provides a comprehensive solution for climate risk management, not just a product delivery infrastructure. We’ve built a robust, end-to-end ecosystem that leverages the trust and relationships we’ve cultivated over decades. At Demex, we empower our clients to become resilient against the increasing threats posed by extreme weather conditions including heat, drought, and flood, as well as the combined impact of multiple weather perils.