“Even if daylight hours aren’t yet at their peak in early June, temperatures are still more akin to summer than spring, so it makes sense to call it summer from a weather perspective. When it comes to compiling statistics on temperature and weather patterns for agricultural planning and business, working around the static calendar is a lot easier than trying to deal with the variability of the Sun’s position in the sky.” Why Meteorological Seasons and Astronomical Seasons Don’t Line Up.

Even though the globe is getting warmer on average over time, year-to-year and day-to-day weather are very different and entirely localized. Summer may be extremely hot one year, and quite cool the next. In fact, many locations are actually experiencing cooler trends in recent summers.

We recently launched The Demex Climate Center to easily summarize recent weather conditions in context with the full historical record on a city-by-city basis.

With the arrival of summer, insight into how summer heat is changing in your city can empower you to manage your heat risk and adequately protect against weather-related loss in your business.

This bar graphs and map shows the number of days between the first and last heat wave of the year (season length). These data were analyzed from 1961 to 2018 for 50 large U.S. metropolitan areas. The graphs show averages across all 50 metropolitan areas by decade. The size/color of each circle in the maps indicates the rate of change per decade. Hatching represents cities where the trend is not statistically significant. U.S. heat wave frequency and length are increasing

Heat waves significantly affect human health: Across the U.S., heat caused at least 10,000 deaths between 1999 and 2016 – more than hurricanes, tornadoes, or floods in most years.  Higher temperatures pose lethal risks: the five warmest years nationwide have all occurred since 2006. In the last six decades, the number of annual heatwaves in 50 U.S. cities has, on average, tripled.  Reporting from the Guardian on Russell, et. al.’s report “Climate Change is Killing Americans. Health Departments aren’t equipped to respond” at Columbia Journalism Investigations.

Heat waves also significantly affect the economy.  In London alone, a 2016 study estimates the cost to the economy in warm years could amount between 1.9 billion and 2.3 billion euros, over 0.4% of the city’s 2005 GVA.  (Helia Costa, Heat waves, productivity, and the urban economy: What are the costs? from the London School of Economics).

The macro-societal and macro-economic effects described above are directly linked to the changing global climate.  That said, every impact is felt locally, and the local impacts can vary greatly from place to place.

In the Tri-Valley of suburban San Francisco, a recent summer heat wave led to a significant decrease in outdoor dining.

“We have a lot of cancellations,” said Esteban Blancas at Nonni’s Bistro in downtown Pleasanton. Blancas said they are seeing a 50 percent dip in business compared to last weekend.  Lima restaurant in Concord, among others, saw a similar drop in business.  “This weekend is maybe down 35-ish percent, 40 percent, around there,” said John Marquez, chef and owner of Lima.  Dan Lin, “Heat Wave Melts Away Business at Outdoor Restaurants in East Bay” from CBS KPIX-5.

While heat waves in the San Francisco area are getting longer, they haven’t gotten hotter in Pleasanton — at least not recently.  In fact, the hottest day that kept diners away in the summer of 2020 in Pleasanton was 106-degrees, and the last time Pleasanton had been that hot was almost fifteen years ago, in 2006.

Outdoor restaurants in the Tri-Valley haven’t experienced too many hot days like this in recent years.  In fact, summers overall have been a little cooler!  Our Climate Assessment shows that hot summer afternoons have been cooling over the last decade. 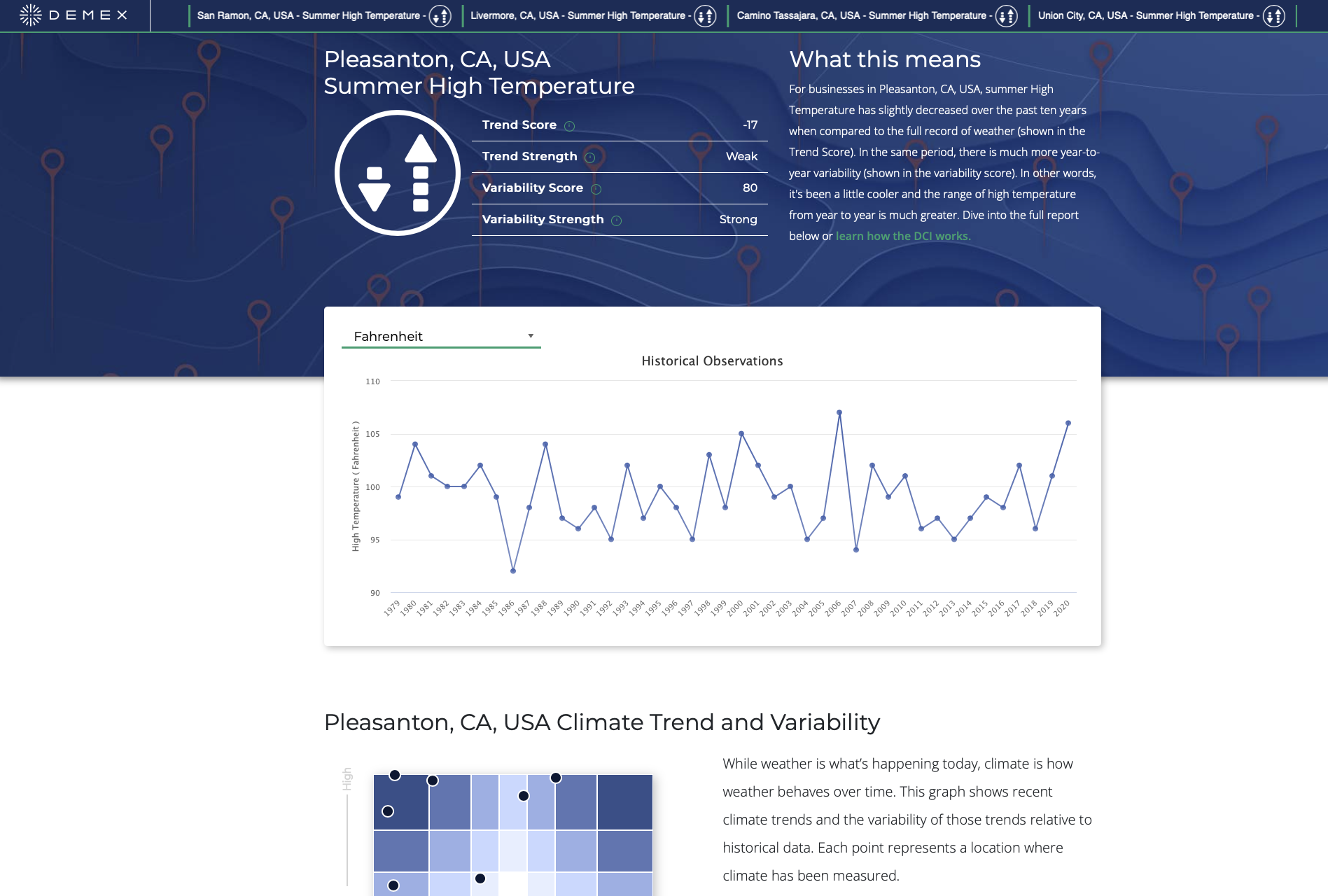 The Demex Trend Score runs from -100 to 100.  Locations with scores closer to 100 have experienced a substantial increase in hot afternoons whereas scores near -100 indicate substantial cooling.  Scores near 0 indicate there hasn’t been much change in trends in recent history.  Therefore, a Trend Score of -17 means Pleasanton has experienced slight cooling in summer afternoon temperatures recently.

Our team studied summer heat in nearly 30,000 cities across the U.S. and published the results on the Demex Climate Center.  You might be surprised to learn that only 3,500 cities in our study experienced much warmer summer days, while nearly 10,000 have exhibited cooling over recent years.

The ten most populous U.S. cities where summertime heat has strongly increased are:

The ten most populous U.S. cities where hot summer extremes have cooled are:

Understanding recent trends in local weather provides a measure of industry-based climate resilience. Businesses with weather-related expenses and revenue use this information to understand how profitability has shifted over time.

Is your city “hot” or “not”?  Search the Climate Center!