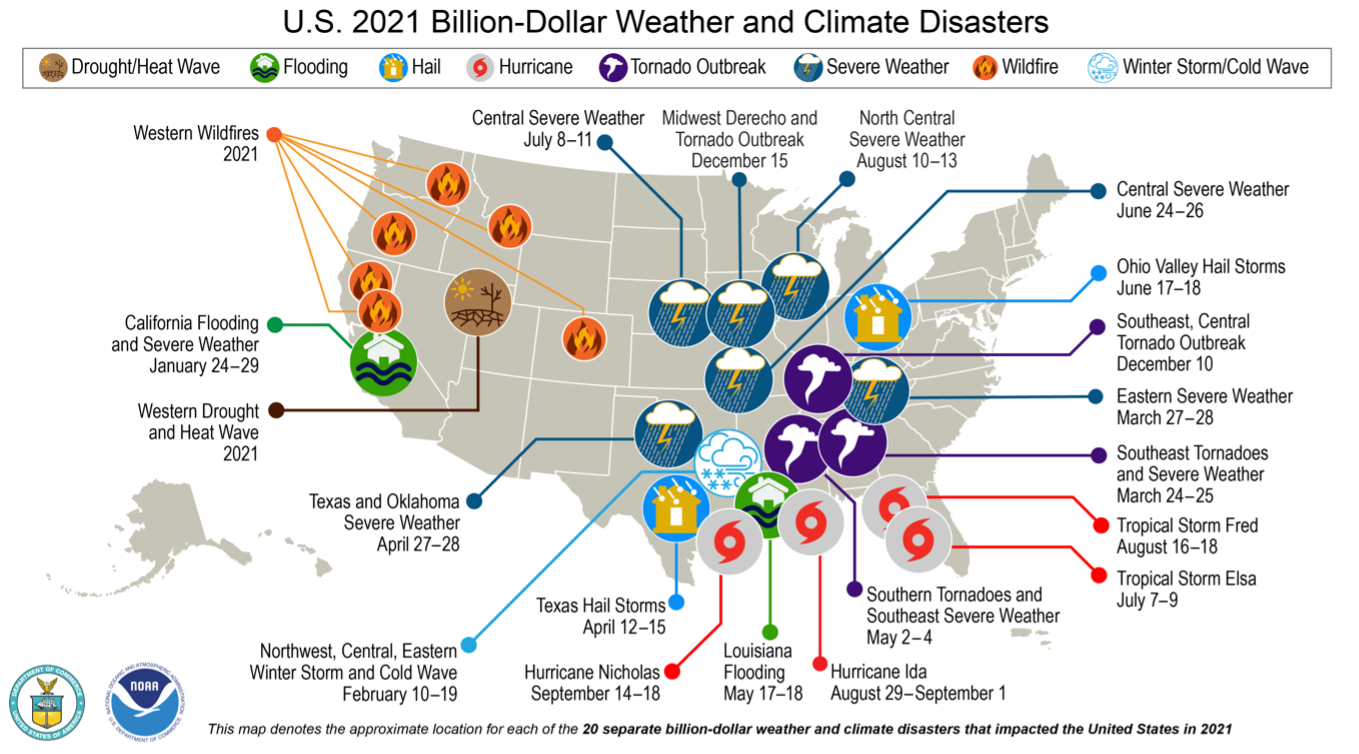 There were 20 extreme weather events in 2021 that caused a total of $145 Billion in economic losses.

A recent NOAA report highlights 20 extreme weather events in 2021 causing $145 Billion in total economic loss. NOAA shows that 2021 was the third costliest year since 1980 and that losses have been rising over the decades.

“The number and cost of weather and climate disasters are increasing in the United States due to a combination of increased exposure (i.e., more assets at risk), vulnerability (i.e., how much damage a hazard of given intensity—wind speed, or flood depth, for example—causes at a location), and the fact that climate change is increasing the frequency of some types of extremes that lead to billion-dollar disasters.” from NOAA, Increasing trend of high-cost disasters: exposure, vulnerability and climate change influence on extremes

Ida was the first major catastrophe since 2018

Hurricane Ida was truly a catastrophic event, causing over $75-Billion in economic loss. Ida made landfall in Louisiana and then brought record-setting rainfall and flash-flooding into the Northeast U.S.

Ida was the first extreme weather event to cost more than $25-Billion since the Western Wildfires in the summer and fall of 2018.

Major catastrophes (aka “Cats”) like Ida lead to losses throughout our financial system. Homeowners, businesses, and renters rely on their insurance to repair or replace things that were damaged and destroyed. Insurance also reimburses lost business and lost wages.

And then there are capital providers such as investment funds, banks, and hedge funds that underwrite “Catastrophe Bonds” and “Insurance-Linked Securities.” These financial instruments offset losses for the reinsurance companies.

“Cats” like Ida, which caused nearly $75-Billion in economic losses, reach all the way up this capital stack. The whole financial complex pitches in to provide economic recovery. Losses spread across many insurers, reinsurers, and other financial firms meaning that dollars for recovery are widespread.

Very severe cats, like Ida, are relatively rare and occur once every few years. 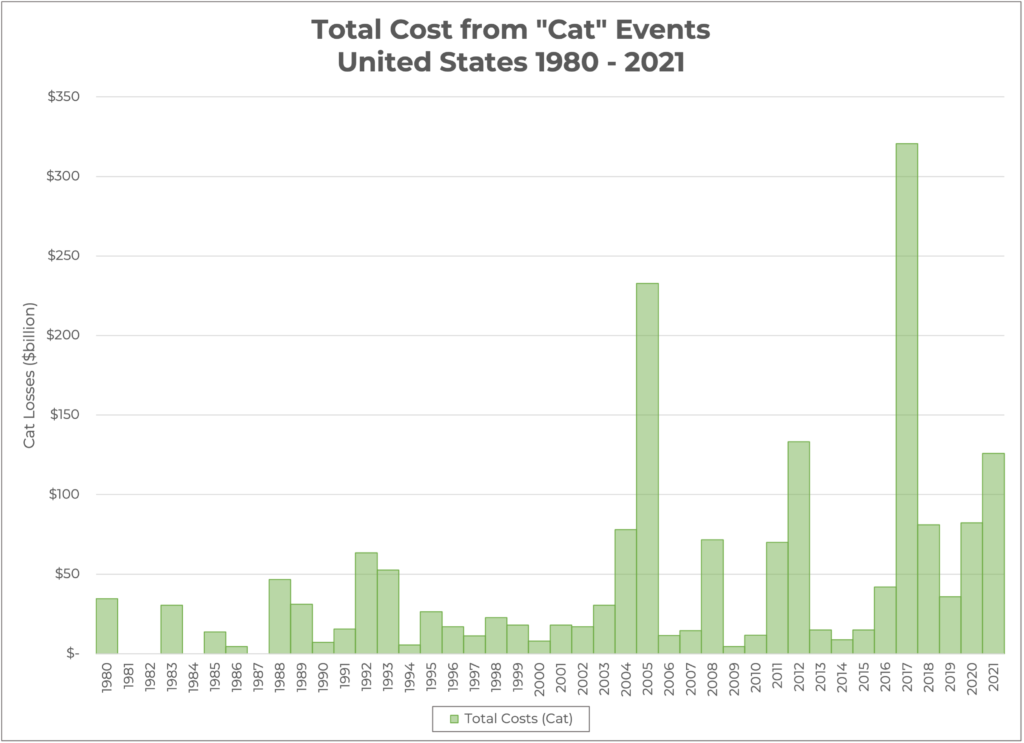 The biggest event under $2.5-Billion 2021 was the December Midwest Derecho and Tornado Outbreak. The storm was the first derecho, a rare kind of severe thunderstorm, to occur in December anywhere in the United States. The 63 associated tornadoes broke the record of 35 for most tornadoes in Iowa in a single day. The event also broke the all-time December maximum temperature record in Iowa.

Drought and heat in the West cost nearly $9-Billion in 2021.

In addition to the Cat Ida, there were three Kit tropical cyclones (Elsa, Fred, and Nicholas) that each cost just over $1-Billion each. 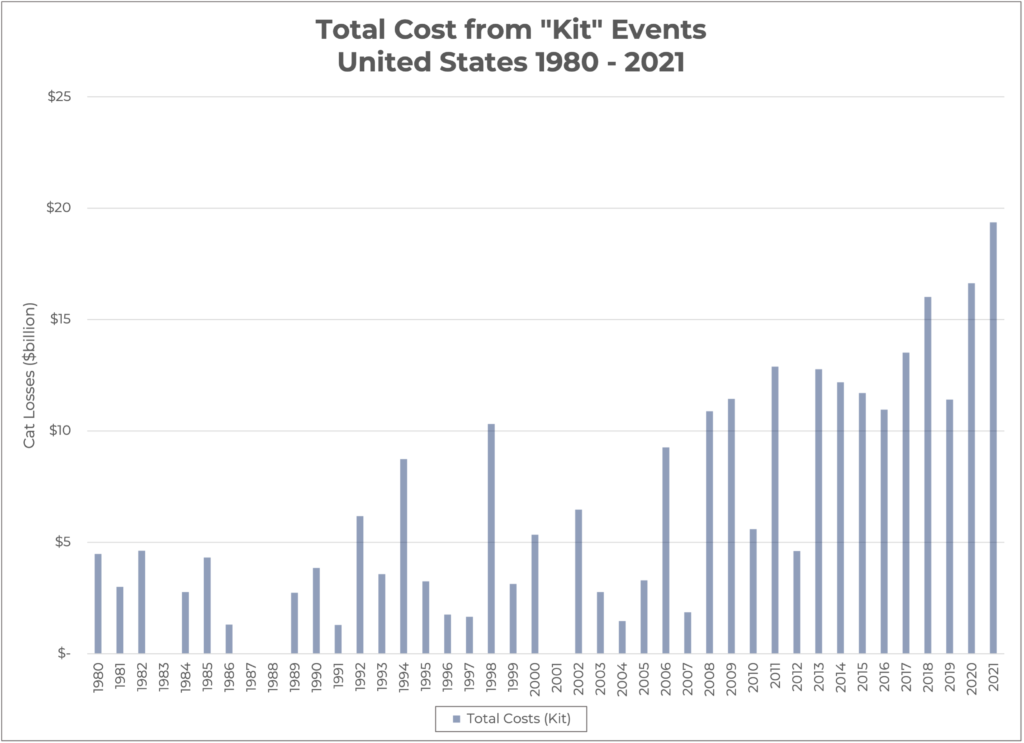 Losses from Kits have increased 5-fold since the 80s.

Insurers and reinsurers have typically offered protection, known as “catastrophe insurance,” for the most severe events, Cats, like tropical cyclones and earthquakes.

However, as the economy adjusts to the effects of climate change, there is a coverage risk gap widening for the Kits, the more increasingly common and less independently severe unmodelled extreme weather events. While standard Cat events are more likely to be covered by re-insurers, protection is lacking for Kit events.

Kits have lower costs individually but still pose an enormous and increasing risk. Kit losses mount up to cause unacceptable costs at insurance companies when reinsurance doesn’t trigger. These costs can sometimes lead to solvency issues. Then, in many cases, Kit losses are simply not insured. This puts property owners, tenants, and businesses in the crosshairs for increasing costs that are not reimbursed by their insurance. 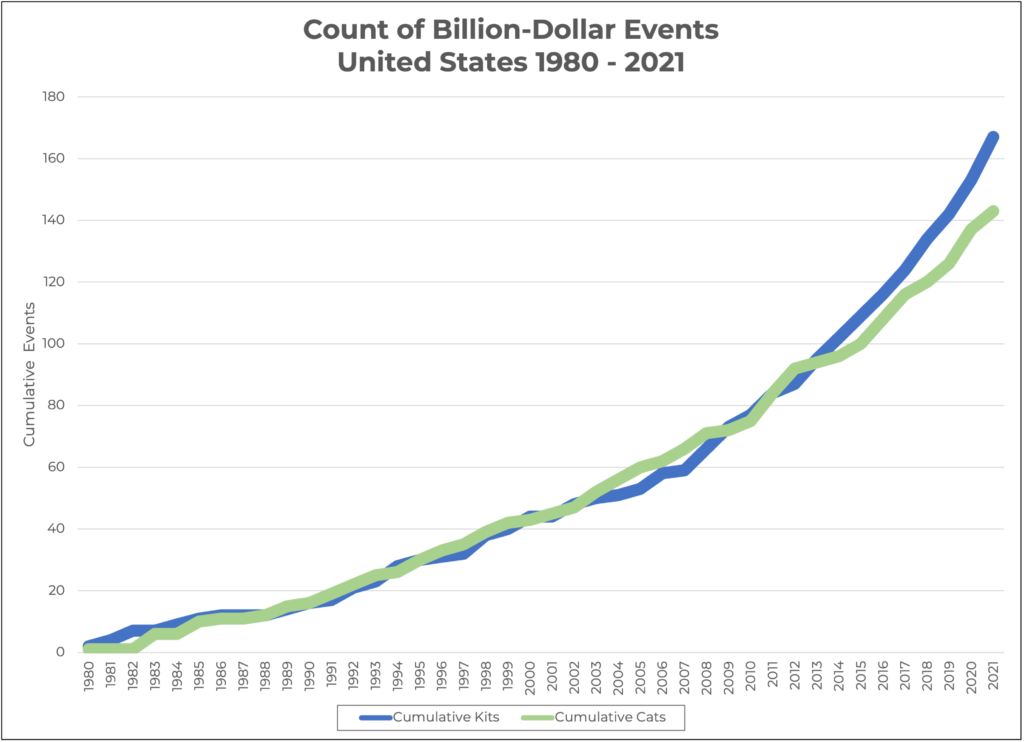 Insurance brokerage and risk management behemoth, Aon, recently said that global economic losses from natural catastrophes reached $343-Billion in 2021. Still, only $130-Billion of the total was covered by insurance and reinsurance. That $213-Billion gap is a market opportunity and a much-needed area for new financial resilience.

“Clearly there is both a protection and innovation gap when it comes to climate risk,” Eric Andersen, president of Aon explained, “As catastrophic events increase in severity, the way that we assess and ultimately prepare for these risks cannot depend on solely historical data. We need to look to technology like artificial intelligence and predictive models that are constantly learning and evolving to map the volatility of a changing climate.” from Artemis, A protection & innovation gap, just 38% of cat losses insured: Aon’s Eric Andersen

In a recent interview, on Bloomberg’s “Balance of Power,” David Westin asked me “So this leads us to the question, what do we do about it? If in fact it is climate and it doesn’t look like that’s going to turn around anytime quickly, what can we do about it to prepare … Give us an example. How do we insure ourselves against … Is it writing different kinds of coverage that specifically includes certain events?”   Listen to the full interview

Our team at Demex is innovating in this gap. Our products focus on financial climate resilience for Kits. We develop specialized coverage for insurers and reinsurers that helps them recover and provides new lines of business. We are also empowering insurers to provide new lines of coverage (aka parametric insurance) that covers business owners and property owners. Insurers that cover Kits protect their policyholders from losses that would have typically fallen outside of their traditional coverage.